“The most extreme talent Europe has seen for a very long time...” - Per “the Bass Viking” Mathisen
“…rising star and a huge talent of the Czech jazz scene…” - Patrick Španko, skjazz.sk
“Daniel will surely leave a big mark on Czech jazz...” – Brian Charette

Daniel Bulatkin is the youngest professional jazz musician on the Czech scene. He was born in 1999 in Prague. When he was 15 years old, he was awarded 3rd place in the prestigious solo piano competition ‘Pianist of the Year’ organized by the company PETROF. He was the youngest participant in the history of the competition. He defended his 3rd place in the following year of the competition. In 2018 he won the individual talent prize at the Cen-tral European Jazz Competition in Brno. Daniel is currently studying the jazz bachelor program at the Academy of Performing Arts in Prague. There, he's had the opportunity to perform, among others, alongside extraordinary saxophonist Zhenya Strigalev (RU).

Daniel currently prepares to release two long-anticipated debut albums with his projects presenting alloriginal music. The first album is the product of extensive touring alongside British alto sax prodigy Tom Smith. The second album will be the debut of the B/Y Organism – a collaboration with ethno-fusion guitarist Kirill Yakovlev, featuring Daniel mostly as an organist.

Daniel’s first original composition Lady of the Lake, arranged for big band by Andy Schofield, is now part of the repertoire of the prestigious Jazz Dock Orchestra. He is also currently a member of faculty at the International Conservatory in Prague. 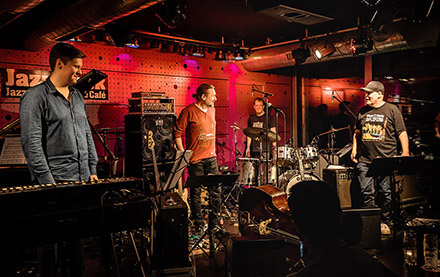 1) A professional musical solution for your event tailored to your needs:
- adjustment of the repertoire according to your specifications (jazz, swing, soul, pop, funk, latin, tango, blues etc.)
- lineup adjusted to your wishes (intimate solo piano, acoustic duo/trio/quartet or a bigger lineup with drums for large events)
- collaboration with top Czech and international artists (Yvonne Sanchez, Martina Bárta, Erika Fečová, Miriam Bayle, Allison Wheeler and many more...)
- possibility of DJ production in case of an afterparty
- negotiable pricing
- we also offer regular musical production for restaurants and hotels

2) Musical workshops as part of teambuilding or other events:
- collaboration with top musical educators specializing in this type of events (fex. Miloš Dvořáček, Miriam Bayle, Cyrille Oswald and others...)
- providing of musical instruments
- a friendly atmosphere
- possibility of large groups (up to 50 participants)
- negotiable pricing
- the event can be lead in many languages (including Czech, English, French, Russian, Spanish and others...)